The successful restoration of Jurassic, the elegant and historic steam locomotive on the Lincolnshire Coast Light Railway, in the Skegness Water Leisure Park, has been short-listed for a major award in the 2019 Heritage Railway Association Awards.

The work by the Lincolnshire Coast Light Railway Historic Vehicles Trust, carried out by its volunteers and their contractors, with the support of the Heritage Lottery Fund, is short-listed under the title “Jurassic in the Park” among three other locomotive restoration projects for “The Coiley Locomotive Engineering Award”. The winner will be announced at the HRA's Annual Awards Dinner in the Burlington Hotel, Birmingham on the 9th February 2019.

Jurassic was successfully steamed for the first time in 31 years in 2017, thanks to work financed by the Heritage Lottery Fund and carried out by the Trust's volunteers and their contractors. The short-listing comes as the LCLR prepares to celebrate its tenth anniversary of reopening after its move to the Skegness Water Leisure Park. 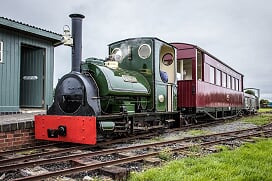 Jurassic was built in 1903 in Bristol by Peckett and Sons Ltd for the quarries and cement works of Kaye and Company in Southam in Warwickshire, together with similar locomotives named after prehistoric geological periods.

The locomotiveruns on tracks just two feet wide, which made her a perfect fit for the rails of the Lincolnshire Coast Light Railway, who bought her in 1961 to help operate their services linkingthe bus terminus at Humberston, near Cleethorpes, with the local beach and holiday camp. When that location closed in 1985, she was moved into store and then to the LCLR's new location in the Skegness Water Leisure Park, close to Butlins, Ingoldmells, north of Skegness. The line reopened to passengers in 2009, since when the historical significance of its unique collection of rails, locomotives, carriages and wagons from the trench railways of World War One, industry and farms in rural England has become more widely recognised.

In 2016, the Heritage Lottery Fund awarded Jurassic's owners, a charitable trust, £43,000 for her restoration and for interpretation of her significance to Britain's economic growth, social developmentand transport before road transport and the internal combustion engine became widespread.

The first task was to dismantle Jurassic, with the boiler and firebox being sent to the North Norfolk Railway for repair and rebuilding at their workshops in Weybourne, near Sheringham.

Upon the successful repair of these items, they were reunited with Jurassic's frames at Skegness, together with the smokebox; her long elegant chimney was put back in place; the injectors (which allow cold water to be transferred to the boiler, to produce steam) wererepaired and refitted, as was the connecting pipework for steam and water. The gauge glasses (which show how much water is in the boiler); the regulator (which governs speed); the reversing lever (which controls the direction of travel) and associated fittings, were all refitted and repaired.

The large cab (which can accommodate four adults, including the driver and fireman) wassand blasted to remove 114 years of accumulated soot, grease and grime; the hand and air brakes were refitted; the saddletank (which carries reserves of cold water) was made water-tight replaced on top of the boiler, together with insulation, boiler cladding, the whistle and new components (such as a brass dome cover and other fittings to replace those stolen several years ago). The saddletank has been removed this winter for further repairs, ready for the 10th anniversary season in 2019.

The whole locomotive was repainted:red for the buffer beams, and Middle Brunswick Green for the cab exterior, saddletank and cladding; black for the chimney, smokebox and running boards.

Jurassic's return to service on the LCLR at the end of the Summer 2017 season was a great success; with the line extended over the winter of 2017/18 it had a longer run for its first full season in 2018 – an overwhelming success, attracting people from all over the U.K. (as well as those taking holidays in the Skegness and Mablethorpe areas) to enjoy the delights of “Jurassic in the Park”.

Railway spokesman John Chappell said: “We always thought 'Jurassic in the Park' was an inspired way to tell everyone that this wonderful old steam engine is now pulling trains in the Skegness Water Leisure Park and it seems the public and the judges of the Heritage Railway Association agree. It is a remarkable achievement for our dedicated volunteers to be in such august company and a tribute to their hard work, skill and dedication.

“It has been part of our work with the Heritage Lottery Fund to ensure that the significance of a small steam locomotive such as Jurassic in the economy before motorised road transport became widespread is explained and there are interpretation boards and leaflets, also funded by the Lottery, on the Railway to explain this. We've found our visitors are intensely interested in Jurassic and her story and we're looking forward to the completion of winter maintenance and her resumption of service in Summer 2019”.

The award for Jurassic's restoration is not the first for the LCLR: shortly after it reopened in the Water Leisure park in 2009, it was awarded the Small Groups Award by the Heritage Railway Association for its achievement, jointly with the Lincolnshire Wolds Railway, which has reopened the North Thoresby to Ludborough section of the East Lincolnshire Railway and is now rebuilding that line towards Louth. It has in the past been honoured by the Transport Trust for its conservation work with its World War One vehicles, some of which was part-funded by the Science Museum.

Full details on the Jurassic story and the Lincolnshire Coast Light Railway on www.lclr.co.uk