The Lincolnshire Tide and Time Bell has officially been installed at one of our most popular coastal resorts, Mablethorpe.

The Lincolnshire Coastal Bid were thrilled to be able to support this project which we believe will attract visitors from all over the globe. A core purpose of the this significant piece of public art is to stimulate conversation and understanding about our relationship with the sea and the coastal environment. As the tide comes in the waves will cause the Tide and Time bell to ring and will be the catalyst for engagement with our environment, our history and our future.

One of the first to hear it ring was Colleen Field, a visitor from New Zealand who was touring the other Time and Tide Bells around our coastline. She was thrilled to meet the sculptor, Marcus Vergette, creator of the Bells, who was making final adjustments to the Bell's ringing mechanism. Next week we will be meeting 'The Clangers', a minibus full of friends from Devon who have already visited each of the Bells, at Appledore, Aberdyfi, Cemaes Bay on Anglesey, Morecambe, Great Bernera in the Outer Hebrides and Trinity Buoy Wharf on the Thames in London. A total of 15 such bells are planned. Perhaps 'bagging' all the Time and Tide Bells will become a new thing. 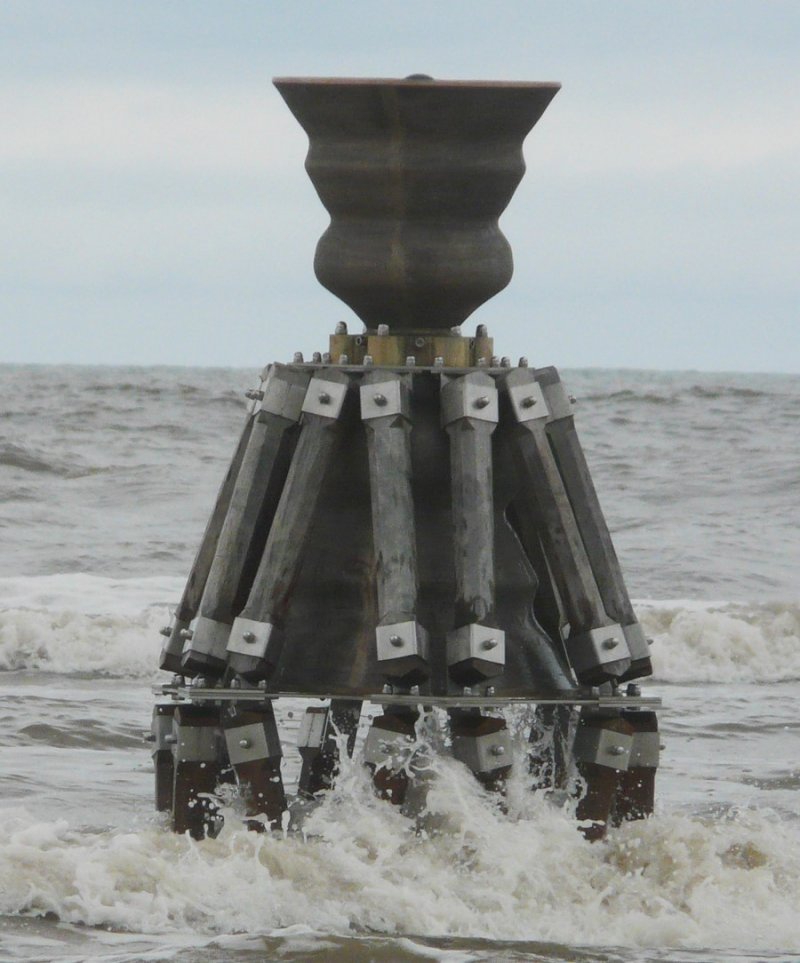 The Public Launch Party is on the evening of the longest day, Friday 21st June, when high tide and sunset coincide at around 9.30pm. Everybody is welcome. Bring a picnic to the Bell from about 6pm or meet us earlier in the afternoon, from 2pm, at the North Sea Observatory, Chapel Point, and join the tour up the coast, starting around 4pm, visiting nature reserves and the 'Structures on the Edge'.

This stretch of coastline has a long history of people who have learned to cope with constant change. Land is gained and land is lost, the fulcrum on which the North Sea pivots into the English Channel, in continual migration, forming and reforming its shape, more like an organism than a pile of stones. As the rest of the world begins to consider the dilemma of sea level rise, here, and along this coast, these communities have had to deal with its consequences for centuries. The Time and Tide Bell is a static object, that has the effect of shifting the time scale to help us appreciate that everything is in a process of transition.

The Community Arts Group brought Marcus Vergette's sculpture to the Lincolnshire Coast, one part of a permanent installation of Time and Tide Bells around Britain's coast, rung by the sea at high tide. We aim to spark conversations about the coastline's past, present and future with a programme of art exhibitions and events, addressing global heating, the climate crisis and other environmental issues.

Improve your career prospects with our new skills portal

NHS "Talk Before You Walk"