Were you, or your children, or grandchildren born on Sunday 3rd May 2009? Or do you have a ticket for travel that day on the Lincolnshire Coast Light Railway at Skegness – the day it reopened in the Skegness Water Leisure Park, where it had been rebuilt by a handful of volunteers after moving from the site in Humberston, near Cleethorpes, where ii had closed in 1985?

Or...do you even have one of the much sought-after tickets from the original line, which opened in August 1960, initially from North Sea Lane station to Humberston Beach and
was then extended on a new site slightly to the south into Humberston Fitties holiday camp to terminate at a new station called South Sea Lane? If so, you can travel free of charge when the LCLR holds its Tenth Anniversary Gala on Saturday 13 th July 2019.

For those paying their £1 fare, special 10th Anniversary tickets have been produced – likely to be in great demand by collectors. (They are traditional Edmondson Card tickets, printed for the LCLR by the West Somerset Railway's ticket department at Minehead). Children will need to bring some proof they were born on Sunday 3rd May 2009 and to be accompanied by a responsible adult (who will also be given free travel). Holders of tickets from that day or from the original Humberston line will need to show the ticket (but it won't be clipped).

The reopening of the first railway in Britain to be built by railway enthusiasts, on a new site 42 miles to the south of its original location, caused huge interest. The then Mayor of Skegness, Cllr. Neil Pimperton and that most famous of seaside icons, Skegness's very own Jolly Fisherman, waved the green flag and blew the whistle to set the first trainload of passengers on their way to the new terminus at South Loop. Plans to celebrate the 10th anniversary of this occasion are still being developed. 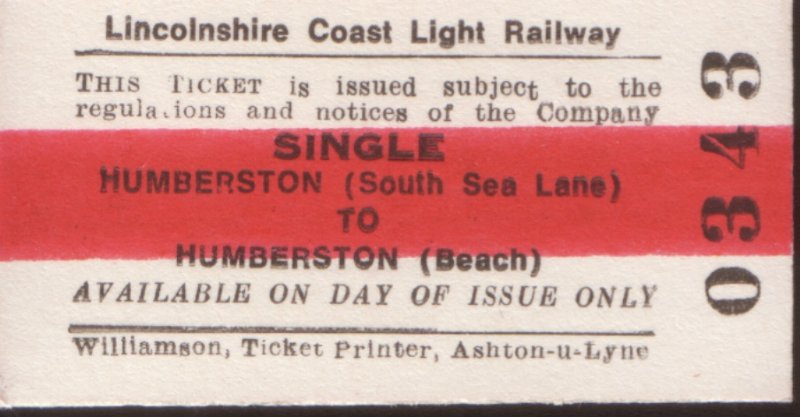 The 1960 line transported holidaymakers from a bus terminus to a beach and holiday camp, as the local roads were not strong enough for buses. It was the first time railway enthusiasts had built their own public railway and it is now credited with providing the impetus for today's hugely popular heritage railways, which form a significant part of Britain's tourist industry.

A quarter of a century on, changing holiday and social patterns and the aftermath of the miners; strike, as well as competition from buses, made closure inevitable, especially when
the trackbed was required for re-development. The engines and carriages were put into storage and in 1992, they were moved to Skegness Water Leisure Park, whose owners shared the railways supporters; passion for preserving the history of rural Lincolnshire. So it was that against all the odds, the line was re-built and some of the historic carriages and locomotives were restored by the determined enthusiasts with only basic equipment.

At the time, the Chairman of the LCLR's Historic Vehicles Trust, Richard Shepherd, said: “The original LCLR was a wonderfully quirky, eccentric little railway which had a unique
character loved by many. After closure in 1985, none of us dared believe that one day we could operate it again. Now, thanks the dedication of all those who have worked so hard for
its revival, the Lincolnshire Coast Light Railway will run again”. 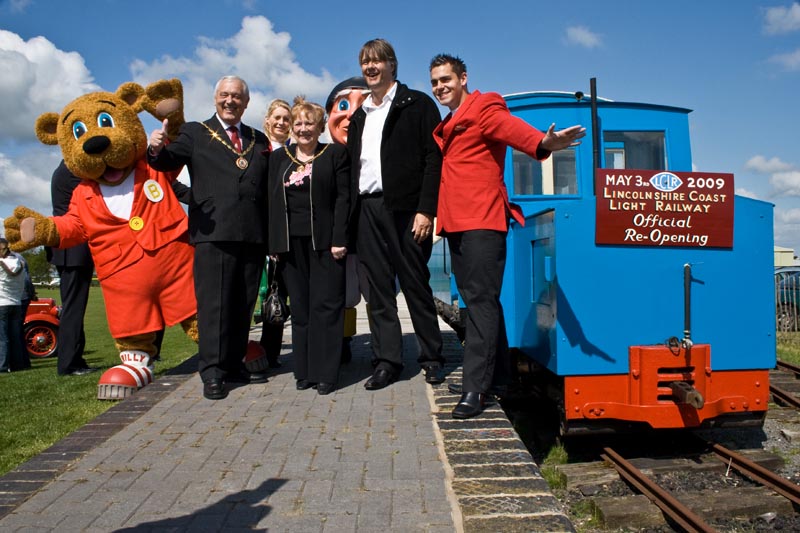 Since the re-opening, the railway has been extended to a new terminus (still called South Loop); the station has been extended and renamed from Lakeview to Walls Lane and provided with a waiting room reminiscent of the roadside halts of the long-vanished Ashover Light Railway in Derbyshire.

The line's steam locomotive, Jurassic, built by Peckett and Sons in Bristol in 1903 for a Warwickshire cement works, has been overhauled with the help of a grant from the Heritage Lottery Fund and returned to service.

The LCLR has operated a “Royal Train” for HRH The Princess Royal, when she travelled on the line to inspect its progress and see developments in the modern holiday industry of the Lincolnshire coast, at the Skegness Water Leisure Park.

The line won a televised competition for deserving charities to receive a grant from the Lottery's People's Millions to restore an old wagon from the trench railways of the First
World War and convert it to a disabled-access passenger carriage – carefully preserving the shrapnel holes from when it was hit by German artillery.

The worn out, century old rails of the main line have been replaced with newer, heavier rail (mainly from an MoD system), sleepers from the London Underground mounted on fresh ballast, held in place by track bolts obtained from the Ffestiniog Railway in Wales.

Further wagons rescued from disused lines in Lincolnshire, Cumbria and Wiltshire have joined the fleet, as have four diesel locomotives.

All this has been achieved by a growing band of volunteers, some of whom live locally, but others who travel from as far as Wiltshire, Co. Durham, Lancashire and East Yorkshire –
and more are required to maintain progress and the service. The Railway's spokesman, John Chappell, said: “It is extraordinary what has been achieved since May 2009. Who would have thought that we would welcome a member of the Royal Family to the railway? Who would have dared to think that Jurassic would steam again with the help of a Lottery grant or that the rusting remains of one of the old wartime wagons from 1917 – the only survivor from those built in Lincoln by Clayton & Shuttleworth -- would be transformed into a disabled access carriage?

“The whole railway has been rebuilt and extended and its historical significance is now widely appreciated – and at just £1 for a return journey, it means families can enjoy the thrill of a ride on a true heritage railway”.

The 2019 season will start with a free service for the annual Caravan Show at the Skegness Water Leisure Park on Saturday 15th June, when no fares will be charged – travel will be free that day.

Trains will normally run from 11.00 – 15.45 on the dates shown below, subject to the terms and conditions of the Lincolnshire Coast Light Railway Co. Ltd. It is possible trains may run
on some other dates, to be announced locally, if weather and other conditions merit operation.